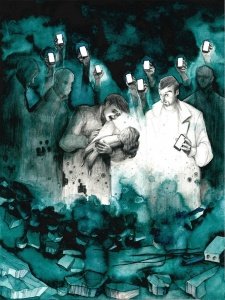 I remember the last time I entered Ghouta by way of the al-Wafidin checkpoint. It was in 2013, on the day before Eid al-Adha, and I was deadly afraid. My heart was racing and I was praying that the soldiers wouldn’t ask to see my papers. Because if they discovered I was from Duma, I wouldn’t be able to enter Ghouta. And I would disappear without a trace.

Unfortunately, a soldier standing at the end of the bridge called out to me. “Young lady, come over here!” I pretended not to hear him. I tried to convince myself that he had called out to somebody else. Then he called out again. “You in the blue scarf!” My heart stopped. I started to tremble. I walked over to him, doing my best to hide any trace of fear. “What is your job?” He asked. I lied and told him I was an office worker and a university student, because I knew that office workers were treated better at the checkpoints. He asked to see my papers. Again I lied and told him I didn’t have them with me, that I only had my university ID. He took it, thought for a moment, and then laughed bitterly. “You can enter,” he told me. “Today is the last day.”

All I heard was the word enter. I ran through the checkpoint. The next day, when I was back at the house, I heard the news, that Ghouta was now under siege and that no one was being allowed to go in or out. It finally dawned on me what the soldier had meant. It had been my intention to celebrate the holiday with my family and then return to Damascus to finish my final year at the university, where I was studying agricultural engineering. It was going to be the year of graduation, of caps and gowns, and of a big degree in a glimmering frame. I was second in my class, and I was thrilled about everything I had worked so hard to achieve, having pushed myself despite all the death, the bombing, and the threat of imprisonment.

Now, trapped inside Ghouta and having put my dreams on hold, I discovered new areas in which we could excel, namely helping the people around me. I still dream of someday graduating, but I can’t even bring myself to imagine passing through that checkpoint again. Of course there are new soldiers there, but the fear is the same. Their hatred of us is the same. How can we leave our land and our homes? How can we just let go of seven years of bombing, destruction, and upheaval? It’s just me and my daughter now. No husband, no brother, and no father. How am I supposed to do that? How am I supposed to decide?